If you are feeling stuck with your songwriting, everything you write sounds the same, and you’re struggling to find some new creative ideas, try these 6 ideas to spice up your songs, and kickstart your songwriting creativity:

A big piece of songwriting is structure and arrangement, and arguably, this is also the thing that people find hardest. After all, writing a cool riff, that isn’t too hard… but writing a whole song from that riff? That is where a lot of people get stuck.

We can prevent ourselves getting stuck like this, by learning how song structure works.

Listen to some of your favourite songs, and write down the:

Of the song. You will probably have to listen to it a few times! Let’s quickly look at each element and what we mean by it:

This is the 90,000ft view of the song, and when writing out song structure, we mean things like:

Also note down the length of each section. Is the first verse half the length of the second verse? Is the last chorus a double chorus?

Figuring out song structure is a vital step towards having more freedom with your songwriting. After working through a few different songs like this, you will quickly discover what does and does not work, and how you can apply these concepts to your own songwriting.

This is another vital area of songwriting. What we are talking about with arrangement, is when different instruments are, and are not, playing.

Go back to the song you analysed the structure of and listen to it again. This time, listen for when different instruments are and are not playing:

By looking at how the instrumentation changes across a song, you will quickly start to get ideas to try out for your own songs.

The arrangement of a song makes an enormous difference to the impact of song, so it is worth putting some time into figuring it out.

This idea is a bit of a combination of the last two ideas, and other elements of music.

When looking at songs from analytical perspective, we can look at the density of the sound in a song, and how that density changes over time.

Elements of music that contribute to density are:

Analysing songs from this perspective, you will start to find patterns that you can use in your own songwriting.

You will probably find that verses and choruses have a contrasting density. The end of a song may have a density different to the section preceding it, even if it is a repetition of the chorus.

Figuring out and mastering song density will be very useful in helping you build more emotional impact into your songwriting.

Bonus: The Most Important Arrangement Idea That Beginner Songwriters Forget

The most common mistake that beginner songwriters make, is forgetting about backing vocals and vocal harmonies.

These are the key between an amateur and professional sounding record.

If you don’t know how to write these, then ask your singer to write them. If they are any good, they will understand how to harmonise their vocal parts.

Take a pencil and paper, and write out the rhythm you are using in a lot of your riffs. Then re-arrange the rhythm a couple of times, and have a go at writing some riffs with this rhythm.

Or even changing some of your old riffs to have the new rhythm.

You will probably write some garbage doing this, but, it will help you free up some extra creativity, and you never know, you might find something you really like on your first few goes!

As an example, let’s say the last riff that you wrote looked like this:

and that this riff, rhythmically, is very similar to all the riffs that you write.

As we are concerned with rhythm, let’s first reduce the riff to just it’s rhythm:

And now, let’s write out some variations on the rhythm. Try not to think too hard on these, just make some up and see what you get. As some examples, we could change the rhythm of this riff to any of the following:

If you want to be more adventurous you could also try changing the time signature.

Once you have created some variations from a purely rhythmic perspective, you want to then go through the new rhythms that you have created, and put the guitar parts to the rhythms.

While you should try and keep the guitar parts similar to the original, you will have to make some alterations. Here are some ideas for new guitar parts for the above rhythms:

So there you have a process for taking your guitar riffs, and creating variations by analysing the rhythm.

Try and be experimental – take the rhythm that we started with and create 6 more variations that are rhythmically different to the examples.

3) Use a Different Key

One thing that is common, especially with guitar players, is that we write songs in keys that are familiar to us.

If you even found yourself getting bored with an album after listening to a few songs, then this is probably why: all the songs were in the same key.

A great way to keep a listener interested for a whole album, is simply by writing songs in different keys.

Grab a pencil and paper, and choose 2-3 keys that you do not usually use. Write out the chords in those keys.

Just by using a key you don’t usually use, you will probably find yourself coming up with new ideas that bring a fresh change into your songwriting.

Even if your ideas are stylistically very similar to previous ideas, they will at least have a different angle, when compared to a previous song, from the new key.

4) Write on a Different Instrument

Are you a guitar player, who writes riffs on guitar, then writes the rest of the song around the guitar parts?

Why not try writing a riff on the bass first, and writing the song around that?

Or writing some vocal melodies / lyrics, and building the song around that… ?

You will find that, when you approach writing a song from a different musical perspective, you get different ideas come out. Apart from anything else, it can be a nice change of pace, creatively, to write from a different instrument.

5) Get a Songwriting Partner

Some people prefer to write songs alone, some prefer writing with other people. If you have never tried writing a song with someone else before, it’s worth a go.

You’ll either love the process, or hate it.

Writing with someone else can bring different ideas to the tablet that help fill out your song.

2 Ways to Find a Songwriting Partner

Are you in a band? Talk to some of the members and invite them over for a writing session.

Do you know some players who are local? Ask them if they want to hang out one day and write some songs.

It’s pretty easy to do!

You could even find a musician online and collaborate with them, across Skype, or by sending Guitar Pro files to each other. It can be a little clunky, but, it does work.

You will probably have to pay them, but it will be a great way for you to:

Songwriting Credits When Working With Others

If you work with someone else on writing a song, unless you have an agreement of some sort, the legal credits for the song are split 50/50, no matter the size of the contribution by either party.

Credits only apply to the harmonic and melodic content, drum parts do not count towards songwriting credits.

If you are working with a producer, then they will probably count as “contributions for hire”. They are being paid a fixed rate and you own anything created. This can be a slightly grey area, so you may want to confirm this with them beforehand.

You’re only going to improve, by doing it, and writing some songs. In fact, this was the biggest single mistake I made with my songwriting – I put 15 years into learning to play guitar before I seriously tried to write some songs.

But… you only get better by having a go and trying. You have to write some bad songs before you can write some good ones!

So there you have it, 6 ways you can improve your songwriting. The most important thing to do now is:

And before you know it, step by step, your songwriting will start improving. 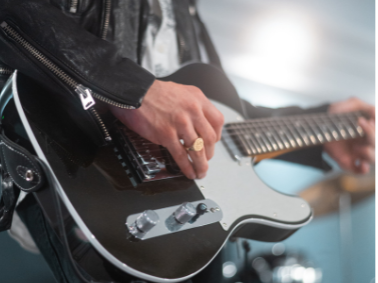